Kaira M. Cabañas is Associate Professor in Global Modern and Contemporary Art History at the University of Florida, Gainesville. She is the author of The Myth of Nouveau Réalisme: Art and the Performative in Postwar France (Yale University Press, 2013) and Off-Screen Cinema: Isidore Isou and the Lettrist Avant-Garde (University of Chicago Press, 2014). In 2012 she curated (and edited the catalogue for) the exhibition Specters of Artaud: Language and the Arts in the 1950s at the Museo Nacional Centro de Arte Reina Sofía in Madrid. Her writings have appeared in a wide range of scholarly journals and museum catalogues and include essays on postwar art and film in Europe and Latin America. She is currently at work on a book-length study tentatively titled “Learning from Madness: Modern and Contemporary Art in Brazil and Beyond,” which is supported by the Creative Capital | Warhol Foundation Arts Writers Grant Program.

Andrew Hussey is Professor of Cultural History in the School of Advanced Study, University of London. He is a regular contributor to the Guardian and the New Statesman and the writer/presenter of several documentaries for BBC TV, BBC Radio 4 and Channel 4. He is the author of The Game of War: The Life and Death of Guy Debord (2001), Paris: The Secret History (2006) and The French Intifada: The Long War Between France and its Arabs. He was awarded an OBE in 2011 for his services to cultural relations between the United Kingdom and France. He is currently writing a book called “Speaking East: The Life in Letters of Isidore Isou”. He lives in Paris. 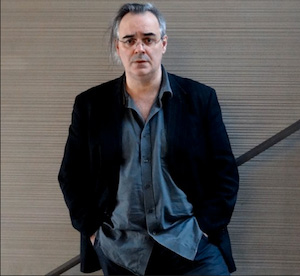 Frédéric Acquaviva, born in France is, since 1990, an autodidact experimental composer and avant-garde sound artist living in Berlin. He has worked with major figures of the historical avant garde, such as Isidore Isou, Marcel Hanoun, Pierre Guyotat, Bernard Heidsieck, Maurice Lemaître, Henri Chopin as well as Jean-Luc Parant, Joël Hubaut, Marcel Hanoun, Maria Faustino, FJ Ossang and Loré Lixenberg. He has been in a composing residence at Emily Harvey Foundation Venice, EMS studios in Stockholm, performing at Tate Modern, La Fenice, Moderna Museet, Experimental Intermedia, Deep Listening Institute. He has also curated more than 40 exhibitions on avant-garde art and poetry (Gil J Wolman and Isidore Isou among others) in museums, such as MACBA, SERRALVES, Museo Reina Sofia. Acquaviva is also the author of around 100 publications, including, besides his own musical work and multiples, many artist books spanning Lettrism, Body and Bio art, Sonic art and composers under the labels Casus Belli, Editions AcquAvivA, £@B and B@£.

Heitor Alvelos is Scientific Board Member for Humanities and Social Sciences at the Foundation for Science and Technology of Portugal (since 2010, chair in 2016), Director of the Institute for Research in Design, Media and Culture at the University of Porto (since 2008), and Member of Academia Europaea (since 2015). Since 2006, Alvelos has developed R&D within the UT Austin-Portugal Program for Digital Media, where he served as Outreach Director (2010-2014), and curates the FuturePlaces Medialab, since 2008. He is Course Director of the PhD Program in Design at U.Porto, in partnership with UPTEC. He ran Drawing Studio of the Royal College of Art from 1999 to 2001, and has lectured in four continents since 2001. Alvelos was art director for the editorial outcomes of festival Manobras no Porto (QREN 2010-2013). He co-owns the random music label 333, and his latest art project is the weltschmerz icon Antifluffy. Since 2003, as Autodigest, (QREN 2010-2013). Alvelos has released sound pieces on Ash International, Touch, Cronica Electronica and The Tapeworm. Faith, his first full-length CD under his own name, is out now on Touch (TO:97). Multimedia work since 1999 includes collaborations with Jon Wozencroft, Fennesz, Biosphere, Russell Mills, Lol Coxhill, Philip Marshall, Anselmo Canha, Jono Podmore, Anabela Duarte, Pangeia, Blaine L. Reininger, Bruce Geduldig, Tuxedomoon, Laura Malacart, Morgan O’Hara, Len Massey, Max Eastley, Rafael Toral and BJNilsen. His research interests currently include the lexical implications of social media, the ecology of perception, and cultural criminology.

Bronac Ferran is a writer and curator.  Her monograph on Hansjörg Mayer, including the first bibliography of his works, was published by Buchhandlung Walther König, Köln, in March 2017. Her recent exhibitions include Design & the Concrete Poem (2016); a token of concrete affection (2015) and Graphic Constellations: Visual Poetry & the Properties of Space (2014). She is co-editor of the Spring 2017 issue of the Interdisciplinary Science Reviews Journal (Taylor & Francis), on interdisciplinary influences in post-war British Art, and is doing a PhD thesis on Hansjörg Mayer and the Typoetical Revolution of the 1960s at Birkbeck, University of London.

Kevin Repp is Curator of Modern European Books & Manuscripts at Beinecke Rare Book & Manuscript Library, Yale University. Prior to joining the staff at Beinecke, he taught twentieth-century European intellectual History, also at Yale, with an emphasis on modernism. For the past ten years, he has focused on the postwar European avant-garde, protest movements, and counterculture, collecting major archives of Lettrism, Situationism, Concrete, Visual, and Sound Poets, as well as leading figures of the postwar underground. He is currently working on his next exhibition, Beyond Words, which will explore the relations between radical politics and experimental poetry. 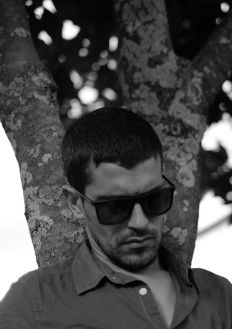 Ricardo Castro graduated in Painting from the Faculty of Fine Arts of the University of Porto, has a Master’s in Philosophy and Contemporary Aesthetics, by the Faculty of Letters of the University of Porto, and a PhD in Drawing by the School of Fine Arts of the University of Lisbon, with a thesis on the aesthetic methods of Lautréamont’s The Songs of Maldoror (Cantos de Maldoror: poética e plástica, 2013). He is a founding member of the collective O Homem do Saco, a typography and small press studio, where he illustrated Alfred Jarry, Alberto Pimenta, Nunes da Rocha, Gil de Carvalho, among others. He is responsible for the electronic jornal www.diariodeumladrao.com 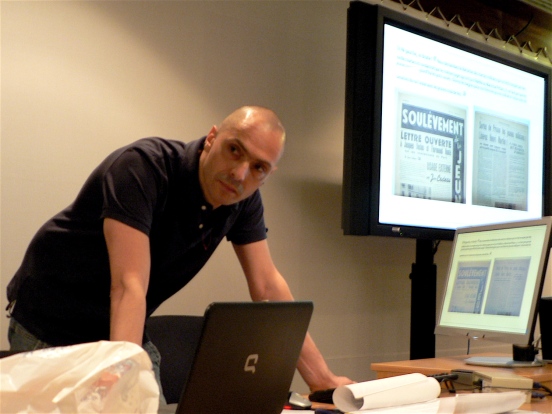 Sylvain Monségu founded a small publishing house Les Cahiers de L’externité (reissues of classical lettrist texts and some issues of the UJCP newspapers including Isidore Isou’s important contributions). Currently teaching in a secondary school, prepares a thesis on Lettrism (University Paris VII). Coherent with his initial training, he is interested in all the political and artistic outsiders, their counter-culture and their influence on academic fields as much as their effective action on the historical scene.

Mariano Equizzi, (member of Komplex) is an Italian digital artist and filmmaker active in Italy and Bulgaria and a former student of the National Cinema School of Rome. He is devoted to the exploration of New Media and provocative approaches in storytelling and speculative fiction. Since the 80’s that he scans and creates multimedia works related to publishing, cinema and to crossroad in which the media can disrupt each other offering to the User/Viewer a new landscape of actions able to enfranchise the audience from market dogmas and media cages. For the work “Komplex, 28”, he achieved the honorable mention of the jury at the 2014 Filmteractive Festival Lodz, PL. Komplex implanted all over the world Augmented Reality experiences based on the psychogeographic exploration of the urban space.

Américo Rodrigues is a sound poet, performer and vocal improviser. He graduated in Portuguese Language and has a Master in Speech Sciences, with a thesis on Emotions in Speech. Throughout the 1990s and 2000s, Américo Rodrigues (1961-) developed an intense experimentation with voice in live shows and recordings. Between sonorous poetry and music, his sonic and vocal work constitute a singular example of appropriation and renewal of the sound poem and of the potentiation of his poetic and musical possibilities. The vocalizations of Américo Rodrigues make a virtuoso use of the vocal apparatus, sometimes with the help of external acoustic sources and with sound manipulation of his recorded materials.