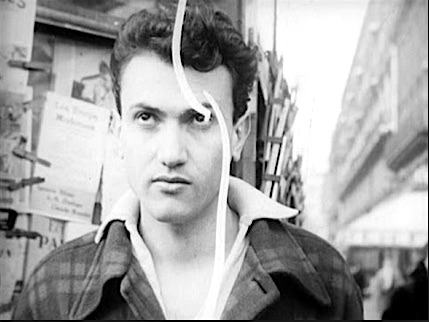 Abstract
The late 1940s and early 50s in France witnessed the opening of the Cannes Film Festival, the establishment of the Cinémathèque Française’s first screening room, and the concurrent rise of Hollywood cinema: An American in Paris won Best Picture in 1952. In the margins of this context, Lettrist “film” posed a challenge to cinema’s established conventions as well as the necessity of its image support (i.e., filmstrip) in order to generate new conditions and communities of viewing. Drawing from her book Off-Screen Cinema: Isidore Isou and the Lettrist Avant-Garde, Kaira M. Cabañas introduces Isou’s practice of “montage discrépant” and examines the historical specificity of the first screening of his Traité de bave et d’éternité (On Venom and Eternity, 1951) at the Cannes film festival. Key to her discussion is Isou’s attempt to “separate the ear from its cinematic master: the eye.”

Bionote
Kaira M. Cabañas is Associate Professor in Global Modern and Contemporary Art History at the University of Florida, Gainesville. She is the author of The Myth of Nouveau Réalisme: Art and the Performative in Postwar France (Yale University Press, 2013) and Off-Screen Cinema: Isidore Isou and the Lettrist Avant-Garde (University of Chicago Press, 2014). In 2012 she curated (and edited the catalogue for) the exhibition Specters of Artaud: Language and the Arts in the 1950s at the Museo Nacional Centro de Arte Reina Sofía in Madrid. Her writings have appeared in a wide range of scholarly journals and museums catalogues and include essays on postwar art and film in Europe and Latin America.